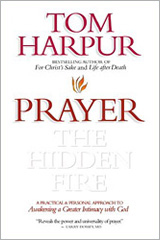 Tom Harpur is one of the wisest spiritual guides in contemporary culture. Prayer: The Hidden Fire reveals the power and universality of prayer. It is invaluable for anyone wishing to learn more about prayer, or wanting to deepen their spiritual roots. -- LARRY DOSSEY, MD, Author of Healing Words and Prayer is Good Medicine.

Who Prays These Days? According to recent national polls, almost all of us do. The practice of prayer is shared by an overwhelming majority across diverse beliefs and backgrounds. But, with the ongoing decline in the membership of institutional religion, it's apparent that many people don't go to church to pray. Many of us now turn to literature for spiritual guidance. Prayer: The Hidden Fire will help you reconnect with your inner need for prayer. Prayers are extremely personal, an intimate conversation coming from a deep human desire to communicate with God. But too many of us are locked into a one- dimensional model of prayer. How do you pray with your whole heart if you are still relying on the prayers of early childhood that begin "Now I lay me down to sleep," or the official, formally-structured prayers of institutional religion? In Prayer: The Hidden Fire, Tom Harpur invites readers to view prayer as an intimate conversation with a personal God, and to use the same language as they would use with a lover or a best friend. Harpur brings the broad theological perspective of prayer to the personal level by exploring the deep yearning that calls one to prayer. He includes suggestions which will help both the fully initiated and the bewildered novice experience more practically and deeply the spiritual benefits of prayer. He also includes, for personal adaptation, a chapter of prayers written for his own use. This is a truly down-to-earth, simple yet honest - from the heart and from the gut - book on prayer that will help you discover what prayer means to you.

Prayer: The Hidden Fire
By: Pauline Finch-Durichen for
The Kitchener Record

It's prayer;  once an undiscovered country to the materialistic "me generation," but now perhaps the most potent spiritual force of the older, wiser 1990s.

That's what popular Canadian author-theologian Tom Harpur found when he set out to research Prayer: The Hidden Fire, a book fans have been asking him to write "in one form or another" for years.

Speaking recently to more than 100 at Waterloo's Emmanuel United Church - one of the many stops on a hectic book tour combined with moving from north Toronto to a country property - Harpur recalled his days as a young Anglican priest, "when I really needed a book like this and just couldn't find one."

Like the late C.S. Lewis, who wrote his famed Narnia Chronicles in middle age so he could read the kind of stories he'd always longed for as a child, Harpur, now 69, has felt an increasing urge to gather in the best of his half-century's experience as both clergy and layman."

"Prayer has been the single most powerful force in all of my career;" he said.

But it's often been the kind of prayer that happens outside church walls;  in quiet rooms alone, on daily five-mile walks, or in receptive silence "without all the stuffiness...the idolatry" that has spoiled the experience for numerous church-goers.

The big problem with a lot of congregational praying, Harpur feels, is that there isn't enough open space in it.  "Why do we do all the talking and singing...and not leave enough room for God to speak?" he asked.  "It's too bad, because most people who still go to church go in the hope that God is alive for them."

But, like Harpur, who shares little hope of finding God within a lot of today's worship programs, they are often disappointed.

"There's a tremendous spiritual search going on right now ... but it's not going along with a rise in church membership," he said, adding an oft-quoted prediction that "the church in Canada is only one generation away from extinction."

So the big question in all fields of religion asked is, "why is there not an answering theology ... a spark to connect this upsurge in prayer with religious institutions?"

One reason, Harpur believes, is that church-based prayer "has become a fixed construct that is never challenged" by the spiritual movements affecting society "outside."  Along with many traditional worship rituals, it's become, "like an archeological dig, recalling only the past."

When Harpur tried to pray that way as an earnest young student and minister, doubt soon crept into his well-mastered formulae.  How could God be listening when one sincere human being couldn't feel his petition "going any higher than the ceiling of my room"

Harpur isn't alone:  he feels he wrote for himself as much as for his readers.

Studies have found many adults have trouble with prayer because their concept of God has scarcely changed from what they learned in Sunday school.  They try unsuccessfully to reach the deity with prayers like "Now I lay me down to sleep..." with its macabre possibilities of death "before I wake" - the judge who punishes sin and knows one's ever fault or failing.

And for many who belong to the declining congregations of most mainstream churches in Canada, that childhood picture of God - a stern, white-bearded patriarch, sitting on a cloud in biblical robes, bolts of lightning at the ready - is at least five or six decades out of date.

Harpur suggests a more appropriate prayer for our day and age might be the one uttered in wise innocence by none other than the ageless cartoon tyke, Dennis the Menace: "Oh God, make all the bad people good and all the good people nice."

"The fact is, that ‘good' people are not always nice."  Harpur reflected sadly, changing gears for a few moments to recall the recent murder in Wyoming of 21-year-old Matthew Shepherd.

Because he was gay, Shepherd was brutally tortured, mock-crucified on a rural fenceline and left to die by "religious" men whose fundamentalist supporters carried signs at the funeral reading "God hates fags."

Harpur stressed that people need more than ever to rediscover the true power of prayer in a world where even them most disillusioned church members are asking, "Why is the Christian faith used to doing such evil?"

But if the untapped power of prayer is still largely eluding Western organized religion, it's growing apace in other walks of life, especially in medicine and science.

For centuries, followers of oriental faiths have attested that physical ritual and meditation result in healthful benefits.  Patterned breathing and the chanting of mantras, for example, set up resonances that literally massage the body's inner spaces.

Harpur found that repeated words and syllables like "ohm," "shalom," "amen," or phrases like "Thou art with me..." have been shown to actually stimulate the brain's pineal gland.

All of these effects, he noted, are ways to attune the body and mind to a pre-prayer mode many of us never consider in our spiritual lives.

Harvard studies have corroborated this sense of spiritual well-being with measurable decreases in muscle tension among subjects who performed mantric or meditative rituals.

And there have been well-publicized reports of directed prayer on behalf of the ill - sometimes even those diagnosed as terminal - coinciding with marked improvement in their condition.

One of the most-often asked questions about prayer, however, is why people should bother "if there's a God who knows you and knows all about you."

Harpur's response is that prayer doesn't answer God's need to be formally addressed, but ours.  "God knows that we need to pray."

And, he noted, it can be as simple as leaving words behind entirely, or "just holding up to the light" all those one cares for.

He offers people seeking that renewed connection a "pre-prayer prayer" that aptly captures the spiritual challenge of today:  "O God, I do not pray or come to you as I think you are, but as you know yourself to be."

A prayer can be a groan, a silent plea for assistance, a demand, or even a wrestling match. To Tom Harpur, it is a hidden fire. His name is known in many mediums - television, as a Toronto Star columnist, and as an author of numerous books, many of which have become Canadian best-sellers. Considered radical for the profession of an Anglican priest, his writing on religion has endeared him to many and raised the ire of others.

"I attempt to rip the scabs off things - get down to a more basic understanding of what's going on," said Harpur.

Are there a lot of scabs?

One of his books, Life After Death, is an eye-opening look into the afterlife which became a hit series on Vision TV, City TV and The Learning Channel. Another, For Christ's Sake, resulted in numerous calls to have Harpur fired.

"For Christ's' Sake offended a lot of people," said Harpur. "It tries to find a radical understanding of who Jesus was underneath all the layering."

His latest book, Prayer The Hidden Fire, has met overwhelming positive response from Harpur's readers. It is the kind of book Harpur wished had been available earlier in his career, especially when he was studying to become an Anglican priest.

"I couldn't find a book that was honest, practical, commonsense," said Harpur. "I thought they were all too precious and churchy."

There was, and in some ways still is, a prevailing attitude that in order to pray you need to use a certain kind of language, adopt 'churchy' positions and, if possible, be in a church.

His book and his upcoming talk at Trinity Anglican Church in Barrie centres on what prayer means, what it's about, how to do it and what's wrong with it. It is a simple but complex subject. And Harpur tackles it with his trademark honesty.

"Most people, when it comes to prayer, apart from when they're deep in do-do, they leave the minister to do that but if they do, they're missing out on tremendous power in their lives," said Harpur.

Recent polls, he added, have revealed (although) most people believe in prayer there is a lot of confusion about how it works and when they should pray.

In one chapter of his book Harpur illustrates his own difficulty with prayer when confronted with a medical problem. He also delves into wrestling with God in another chapter, the very human result of not having one's prayers answered. Or are they answered?

Today Harpur lives with his wife Susan Coles. Their three grown children, all daughters, have moved into careers as an actress, a lawyer and a teacher.

It was Harpur's father who followed in his footsteps, becoming an Anglican priest six years after his son's ordination.

At 71-and-a-half Harpur spends his mornings writing. He enjoys the outdoors, fishing, and a daily five-mile hike that is if he's not cross country skiing.

His ministry today is much broader than it was at his first parish, St. Margaret's-in-the-Pines in West Hill, Ontario, and later as a professor of New Testament at the University of Toronto (Toronto School of Theology), or as religion editor.

While he continues to be a priest today, not however in active service, his ministry with words continues.

It is born out of an ability to identify with people, their questions and concerns, and those who have no religious affiliations.

"I would rather speak to agnostics than the converted," said Harpur.