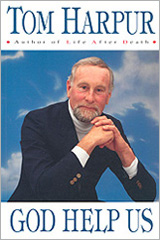 Every week in his newspaper column on religion and ethics, Tom Harpur pricks the ease of Canadians who are comfortable or complacent in their faiths. No matter our religion or whether we are atheists or agnostics, Harpur challenges us to think about our spiritual well-being and the health of our world.

Harpur is a rare and a powerful voice. He writes with the knowledge of a scholar, the flair of a journalist, the concern of a pastor, and the wisdom of someone who has thought deeply about issues with an open, inquiring mind. He is one of a kind in Canada.

God Help Us is a collection of the best of his recent columns. Dealing with topics as vital as the environment, as harrowing as the Gulf War, as timeless as the teachings of Jesus, and as current as the role of women in the church, Harpur consistently surprises, provokes, and enlightens his readers.

A former Rhodes scholar and professor of New Testament studies at Wycliffe College, Toronto, Harpur is also an Anglican priest. He resigned from parish work in 1979 to write full-time in the mass media, in the process extending his "parish" to the whole of Canada. Today, his television show on Vision TV, his weekly column, and his books, notably For Christ's Sake and Life After Death, have consolidated his reputation as one of Canada's pre-eminent religious voices and as a sound spiritual guide for modern times.