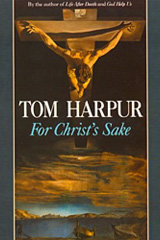 This radical book reveals the real, historical Jesus and reminds us what he actually said.

Who was Jesus Christ? Was he God in human form? Was he the divine Son of God, conceived by a virgin, who came down to earth to found the one true religion? This is what the Church has been preaching since the Middle Ages, but the Church's portrait is a far cry from the Jesus Christ described in the New Testament.

"For Christ's Sake" is Tom Harpur's classic study of what the Bible actually tells us about Jesus. Controversial and radical, in that it goes to the roots of what is known, Harpur's book strips away the mythology about Jesus to reveal a man whose message is still fresh and relevant today. - From The Anglican, Toronto, Ontario

A revelation about the true, loving spirit of God Reviewer: Frank King, Whitby, ON Canada.
April 7, 2002.

I've just returned to Christianity after many years away, yet could not reconcile myself to the notion of an angry god demanding part of Himself to die on a cross for people's sins. I remembered reading For Christ's Sake years ago and enjoying it, so I read it again. What a revelation! With compassion and intelligence, Harpur shows, repeatedly and through investigating the New Testament, why Christ is not and never was God in the flesh. After much reading of other Christian writers -- and through his own training and education (he's an Oxford-trained, Anglican minister) -- Harpur suggests a loving, positive reason for Christ's death and resurrection. It's a reason I can easily understand and joyfully accept. And that brings me fully back into the fold of Christianity. If you have questions, if there are things that you don't understand or things that you find repugnant about aspects of Christianity, READ THIS BOOK. It won't take long, but you might finish it the way I did...with tears in my eyes and saying a prayer of thanks to God.


"Harpur has issued a powerful, contemporary challenge to those who call themselves Christian."
- The Edmonton Journal